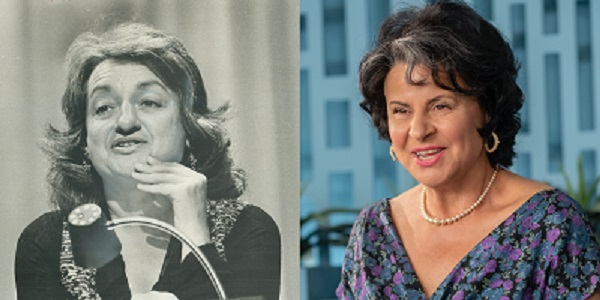 Betty Friedan the American author of the landmark book The Feminine Mystique (1963), was an activist who created a social revolution post-World War II period by dispelling the myth every woman wants to become a homemaker and housewife and finds fulfillment through marriage, sexual passivity, housework, and child rearing. The young Betty Friedan the feminist encouraged women of the 60s to step out of their homes and seek new opportunities for themselves. Betty with her women rights movement also advocated for an increased role for women in politics. In October 1966, she co-founded the National Organization for Women (NOW) with a budget of USD 135.

Influenced by her Mother

Betty Friedan was born in Illinois on February 4, 1921, as Bettye Naomi Goldstein. Her Jewish father Harry owned a jewelry store in Peoria, while her mother Miriam was a housewife. Only when her father became ill that Mirian started to write for the society page of a newspaper which she found hugely gratifying.

Betty went to Peoria High School, and like her mother began to develop an interest in the school newspaper. But when she was refused an opportunity to write for the school newspaper, she and six other friends launched a literary magazine called Tide, which expressed more about home life rather than school life.

She went on to graduate from Smith College in 1942 with a major in Psychology. While still in college she continued her passion for writing becoming the editor-in-chief of the college newspaper. The editorials were blatantly political and controversial under her leadership, with a strong anti-war stance.

In 1943 after receiving a fellowship to study at the University of California, Berkeley in psychology with Erik Erikson, she left after a year to go to New York to become a reporter.

Betty’s book The Feminine Mystique is often credited with sparking the second wave of American feminism in the 20th century. The book was an accumulation of Betty’s experiences that soon began after marriage. Betty Goldstein married Carl Friedan a theatre producer, in 1947 while working at UE News.

They had three children Daniel, Emily and Jonathan. She returned to work as a reporter after her first child was born, but lost her job when she was pregnant with her second child. At home for 10 years living as a housewife and mother in the suburbs of New York, Friedan started to become restless and often wonder if other women felt the same way. Her occasional work since 1952, as a freelance journalist was not seemingly enough.

In search of an answer, in 1957 Friedan began to survey other graduates of Smith College and populated the data that clearly showed the feelings were no different for hers – This research laid the foundation of The Feminine Mystique which became America’s controversial bestseller of 1963.

After a violent marriage, Carl and Betty divorced in May 1969.

Betty though raised in a Jewish family became an agnostic and was one of the signers of the Humanist Manifesto II.

Betty Friedan began to openly write about confining gender stereotypes. She co-founded the National Organization for Women (NOW) in 1966 and served as its first president until 1970. During the time, she raised her voice and directed campaigns to

She was an activist for the Women’s Strike for Equality (August 26, 1970) that led the campaign for ratification of the proposed Equal Rights Amendment to the U.S. Constitution.

She was also a founding member of the National Women’s Political Caucus (1971). In Betty’s words, it was organized “to make policy, not coffee.”

In 1973, Betty Friedan became the director of the First Women’s Bank and Trust Company.

Along with The Feminine Mystique (1963), Betty Friedan published five other well-known books.

She also wrote for a column in McCall’s magazine from 1971 to 1974. Her wrote with her indomitable style for The New York Times Magazine, Newsday, Harper’s, Saturday Review, Mademoiselle, Ladies’ Home Journal, Family Circle, TV Guide, and True Magazine.

She brought to fore women’s issues in her lecture at Harvard and Yale and established a thinktank at the University of Southern California for the same.

Betty Friedan became the iconic leading voices of the feminist and women’s rights movement of the twentieth century. At a time during the Civil Rights Movement of America, she among other women became the face of feminism. The American media called Betty the ‘Mother of Feminism’. On her 85th birthday, February 4, 2006, Betty passed away at her home in Washington, D.C. She is survived by her three children and nine grandchildren. Even today the work that Betty Friedan started is still being carried by the three organizations she helped establish.

In 2020, amidst the COVID-19 lockdown, Kylie Minogue recorded at her London home, DISCO her fifteenth official album that contained "Say Something"...
Read more