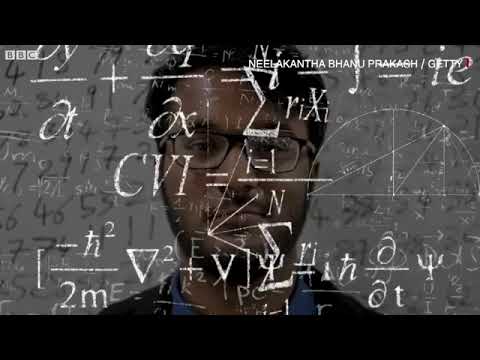 After the likes of Srinivasa Ramanujan, P.C. Mahalanobis, and Shakuntala Devi, India now introduces to the world another math genius and human calculator – Neelakantha Bhanu. The young Neelakantha fondly called ‘Bhanu’ is the World’s Fastest Human Calculator, a Math Educator, and the Founder of Exploring Infinities. The 22-year-old Hyderabad math geek, Neelakantha Bhanu Prakash won the first-ever gold for India in the Mental Calculation World Championship at Mind Sports Olympiad (MSO) held in London on August 15, 2020. This year the virtual competition for mental skill and mind sports had 30 participants up to 57 years of age from 13 countries including India, UK, France, Germany, Greece, Lebanon, and UAE. Bhanu Prakash led with 65 points winning the competition for India while Lebanon and UAE held second and third places respectively.

Neelakantha Bhanu Prakash holds 4 world records and 50 Limca records of which his top three records are:

This is based upon correctly adding a randomly selected two-digit number (37) to itself 41 times in 15 seconds without the use of a calculator. His speed is even faster than that of a calculator.

It includes correctly multiplying three 3 digit numbers simultaneously, without the use of a calculator and without writing down the intermediate results in 40.43 seconds.

The subtraction record is about subtracting a 70-digit number from another 70-digit number where all digits except the first in the minuend are smaller than the corresponding digits in the subtrahend in 54.06 sec.

In 2015, Neelakantha Bhanu Prakash founded the organization Exploring Infinities in Hyderabad which today employs a team of 30. Bhanu, himself shares and teaches eager learners and mostly students math skills by demonstrating before them his record-breaking abilities.

The start-up aims to work with schools, educationists, and policymakers promoting cognitive ability development education programs around the world. Its purpose is to merely make children fall in love with math through experiential methods and visualization activities. The organization reaches out to students across different schools to create awareness about mental math and to train them by harnessing their true brain potential. From addressing a variety of audiences in school classrooms to holding conferences, demonstrations, and workshops, Exploring Infinities has reached out to more than 20 private and government/schools/colleges/business schools. It is also trying to implement researched math courseware for government schools and other education programs.

“My vision is to create math labs, reach out to millions of children, under what I call in order to make them start loving math and arithmetic calculations. Three out of every four students who study in the government schools of India have trouble in understanding basic Mathematics. The phobia caused by math and the demotivation is the number two cause for kids opting out of the rural schools in India,” says Bhanu.

He further proudly expresses, “I hold 4 world records and 50 Limca records for being the fastest human calculator in the world. My brain calculates quicker than the speed of a calculator. Breaking these records, once held by Math maestros like Scott Flansburg and Shakuntala Devi, is a matter of national pride. I have done my bit to place India on the global level of mathematics.”

The birth of a prodigy

Born on October 13, 1999, Bhanu Prakash, is fondly called The Number Prodigy because of his superhuman ability in doing complex mathematical calculations including addition, subtraction, multiplication, division, power calculation, square root, cube root, power multiplication, math marathons at unimaginable, amazing speeds with 100% accuracy. His brain is capable of processing 12 NUMBERS/SEC, which is 10 times faster than the average speed of a regular human brain.

After completing his schooling at Bharatiya Vidya Bhavan’s Public School (Vidyashram) Hyderabad, he proceeded to St. Stephen’s College, Delhi where he received a BSc Honours degree in Mathematics in 2020.

At the age of 5 years, Neelakantha met with an accident as the bike he was traveling in collided with a bus. Seventy stitches later, he was home with a protruding skull and disfigured face. The child’s face was so badly disfigured then, that his parents decided to keep any mirror in the house out of reach from the child. Also, as the doctors had advised on mental engagement as part of the recovery process, it was then that his parents introduced him to the world of puzzles and abacus to develop mental stamina.

Into the mind of Bhanu

Bhanu Prakash while addressing numerous Indians at various events, has also represented India at several international conferences including TEDx. According to him, he now trains only for an hour a day as compared to his previous 4-5 hours of training. “It is like a sport. We have to train in cognitive abilities, observation, listening and others and take up smaller and bigger tasks.”

He further explains to be able to break cognitive barriers, “First, quantify your barrier and gauge how far you are from it. Identify the closest struggle you have. Don’t think miles ahead. If you want to memorize 30 items and can only do 5, the immediate cognitive barrier that you set up should be a 15. Once you reach that, you’ll know you can reach a 30 – and perhaps, a straight 100. Second, find your method. What method are you using to break your barrier? Are you approaching it strategically? Brute force practice does not work. Practice, yes, but with an entirely different mindset every time you do. Experiment and play around. Add other elements and even distractions to your practice. Create challenges for yourself, innovate, and push yourself. Look into how other people are doing what you want to do. Try and look at the same problem from several different angles.”

After beating Shakuntala Devi’s June 18, 1980 record and defeating Scott Flansburg, the American, The Human Calculator and host for The National Counting Bee held every year, Neelakantha Bhanu Prakash hopes to start a mathematics initiative, Vision Math. He is hoping this brainchild and initiative garners the attention of Prime Minister Narendra Modi to put India back on the “global map of excellence.”

Yes, Modiji, this is our true ‘Make in India’!