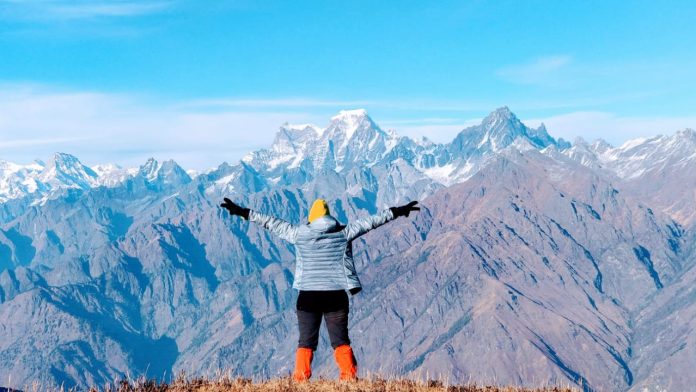 In Conversation with Prakriti Singh on World Mental Health Day, she is a technology manager by profession and traveler, blogger, explorer and mobile photographer by passion. She loves trekking and have explored the Himalayas and rural India solo or at times with travel groups. When not traveling, you will find her mostly in the outdoors and in nature. She is also interested in martial arts and fitness. She has learnt MMA and now learning KalariPayattu and started weight training recently.

In October 2018, she entered an abusive relationship. She had no idea what she was getting into, how much will it impact her mental health and how it will drain her completely. She experienced sudden peaks and sudden valleys emotionally and mentally. It was very exhausting till she decided to break free and went absolute no contact with her abusive ex. It’s been a year to this step and she is amazed by her growth over the last year.

To be honest it was a series of events which made me realize that I am in an unhealthy toxic and emotionally abusive relationship. One of the early episodes of abuse if I recall, was on my friend’s birthday when he threw tantrums, punched himself in the wall and created a scene on the street before I was leaving for my friend’s birthday party. He couldn’t handle himself when there was no undivided attendtion. So, whenever I paid the slightest of my attention to anyone, I had to face such abusive behavior. He was totally insecure, could not trust me, made up stories in his head and confused me (gaslighted and manipulated me).

I realized I had to always be careful of what I say, what I do in front of him or else he may get triggered and abuse me. I felt I was walking on eggshells. I was stuck in the cycle of abuse as after every abusive incident, he came back, over promised that he will change, love bomb me so much and as soon as I let him in completely, he would repeat his abuse.

2. The decision to end this wouldn’t have be easy, can you tell us how did you managed your mental breakdown, your thoughts and worries? Have you ever felt of returning? Any incident you would like to share with us?

It’s so easy to ask someone, question someone “Why don’t you leave?” But when I experienced it myself, I realized that leaving an abusive relationship is not easy. The reason is the cycle of abuse itself, the extreme love bombing which we receive after an abusive phase makes us see the good in him and give another chance.

I gave him a lot of chances, more than he ever deserved. But I had recognized the pattern and decided to break free from the cycle of abuse. I remember one incident where he gave me silent treatment for hours when I was driving, and a male friend called me. Even after reaching home the silent treatment continued. Then after few hours he called me and abused me randomly saying that I don’t care and other random nonsense. It was a long call is all I remember, and he basically tried to break my soul. I was alone at home that night and I slept crying. The next morning at 7 am he was at my door with a breakfast buffet of all my favorite food items. This was a common thing, the abuse always followed by a reconciliation phase where he tried extremely hard to gain my trust.

3. Mental illness like anxiety, depression, long lasting sadness, mood swing, social withdrawal etc. is still considered as taboo in our society, people are scared to talk about this as they think they will be judged, misunderstood and cornered instead still you choose to speak and share about it to your parents and close friends and took help from them on time. Whom did you speak to first? What was their reaction? Lastly, how did you prepared yourself to speak up?

In my case, I got saved because I was so vocal about the abuse. The abuser usually tries to isolate the victim, but I always shared things with my sister, my mom and of course my close friends. Even the incidents of abuse, with every detail. I started sharing with few close friends initially and opened up slowly. My friends recognized I am in an abusive relationship and always gave me a listening ear. Talking to others really helped me and I realized it was good for my mental health. I would have gone really crazy and he would have proved it to the world that I am the crazy one. Yes, that’s what abusers do, they try to prove that their partner is the crazy one. He used to tell me stories of how crazy his e-girlfriends were, that was a big red flag which I ignored initially.

My family and friends were a big support system and always reminded me that the only apology which I should accept is changed behavior.

I recently reported and called out my abuser on social media and even filed a cybercrime report. Even though my friends and family knew about it, I thought it was necessary to take the step, months after the breakup so that he doesn’t repeat with someone else or at least think of the repercussions of his actions. I received a formal written apology for him and details of the incident and apology letter are now available with the cyber cell as well.

4. Today, you are what you wanted to be, an independent girl, an avid traveler, writer, working for corporate and working on your dream project. You STOPPED and started focusing on yourself, identified what you need and what makes you happy. What message would you like to share to our reader on this?

I would say Speak up. Speaking up is half the battle won. Do not think of what the society would say or think and speak up for yourself. Speaking up literally saved me. Well you may feel initially that it’s going to be tough but the freedom and growth which you go through after you overcome that initial inertia is tremendous.

5. How did you heal yourself from the trauma of draining relationship ?

My journey of healing was a long one, but I was strong enough not to give up. I started doing all the things he made me feel bad about, my solo trips, dressing up, meeting my friends, travelling with my friends and being a happy extrovert person spreading happiness. I went for a trip with my girl gang last September and I can say that the trip was the start of my healing journey. I went for a solo trip for my birthday, explored in Risikesh and joined a trek group for Pangarchulla Peak trek in the Garhwal Himalayas. I started sharing my stories on Instagram, wrote a blog about my experience and created a page to help others in healing journey . I have been unstoppable since then, was in Rajasthan for New Year, explored a lot of trials locally, lost 7 kgs and improving my fitness levels. I have upskilled myself on topics I am passionate about, Travel writing and content creation, even got featured on National Geographic’s social media. I reported my abuser and called him out on social media, filed a cyber crime report and received an apology letter from him. I still get anxiety at times, but I have come out stronger and healing is a gradual process, we need to appreciate small wins and progress.

6. Is there enough awareness for mental health in world? What are your thoughts here?

Yes and No. Yes because when I started googling about abusive relationship, I came across a term “Narcissistic Personality Disorder” more commonly known as NPD. When I started reading about NPD, I realized that it’s a serious disorder which needs treatment and if the partner is not willing to take treatment, it’s better to leave and go No Contact. There are so many resources and help available online. The online resources really helped me in chalking out a plan to exit the abusive relationship.

But again, there is not much awareness about a lot of basic mental health issues. I was blaming myself initially for feeling confused, getting anxiety and what not. I spoke to my friends in the field of mental health and life coaching and understood it’s okay to have these feelings. PTSD, Anxiety these things are common for someone who was in an abusive relationship. Accepting that, becoming self-aware and working on it was helpful in my case. People lack awareness about simple things but a lot of mental health experts, survivors are trying to make it better. I have started my own page as well though I need to post more content there, but the intention is to raise awareness of NPD, anxiety and overcoming trauma.

For a battle to win, one must take up their own fight, and it’s not easy when you are fighiting depression and absuve relationship. Prakrti’s story is an absolute inspiration, instead of sulking down she took the fight up and came out winning! more power to her and more power to everyone out there who are in similar situations! Don’t ever give up. We are here, we are listening, speak up!

If you have any such inspiring stories to share with DOER, do reach out to us!