Home Stories Influencers NIRMA is not just a detergent anymore, it's a global brand worth...
FeaturedStoriesInfluencersInspirationDOER TVInspiring Stories 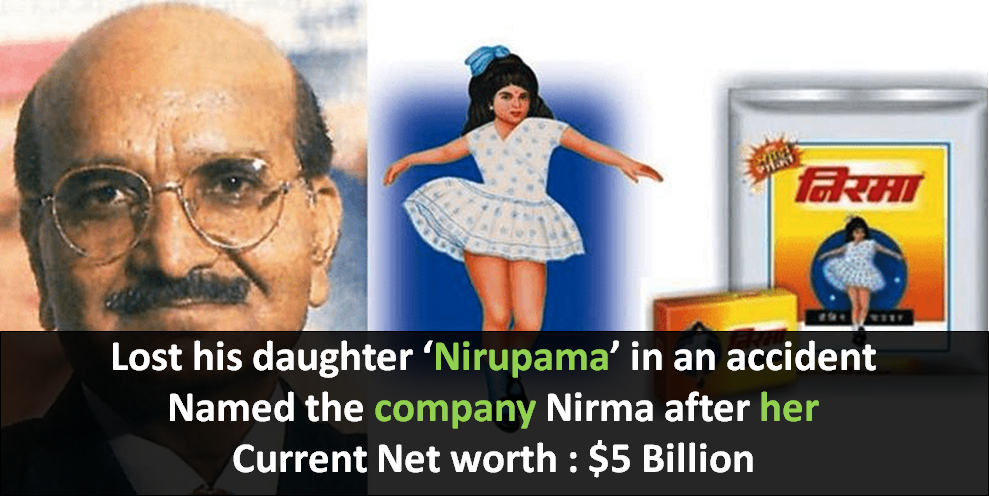 The year 1969, news stories include The Beatles’ last public performance, first ‘Concorde Test, and the first persons ‘Neil Armstrong and Edwin Buzz to set foot on the moon’. History was being made. Closer home an Indian entrepreneur Karsanbhai Patel was all set to challenge the big MNC, Hindustan Lever Ltd (now Hindustan Unilever) and its detergent ‘Surf” that had monopolized the market. This is the beginning of Nirma – the INR 37,500 crore story behind becoming the ‘sabki pasand’ and how Karsanbhai Patel made it all happen. An indigenous, environment friendly, and affordable detergent was born for India’s middle class.

After completing a B.Sc. in Chemistry Karsanbhai Patel, worked as a lab technician in the New Cotton Mills and then as chemist at the Gujarat Government’s Department of Mining and Geology, had decided he wanted to manufacture a detergent for the middle-class and lower middle-class families. Surf in those days priced at Rs.13 per kilo was actually too expensive for the middle class who continued to use soap bars to wash their clothes. So, 1969 in the backyard of his house in Ahmedabad, he developed the formula and made a phosphate-free yellow-coloured detergent powder for only Rs 3.50 per kilo. He named it Nirma, after his daughter ‘Nirupama’ who had passed away in an accident.

Karsanbhai started to sell 15-20 packets a day on his way to the office on bicycle, some 15 km away.He knew this handmade product was very good so he began to offer it with a money back guarantee with every pack that was sold. The demand was growing in Ruppur, Patel’s hometown. Having found considerable success in Gujarat, Karsanbhai quit his full time job with the government to make Nirma a household name all over India.

On February 25, 1980, the Company promoted by Karsanbhai K. Patel was incorporated as a Private Limited for the manufacturing and selling of Detergents, Soaps, Chemicals and Allied Products. Starting a business and converting it into a success story is not always easy. The path is slippery. As Nirma started to grow, competing with Hindustan Lever was no easy task. Most retailers accepted the detergent from the salesmen more as a special favor while they continued to push the multinational brand Surf. Nirma washing powder was just being stocked on long credit and when the salesmen would go asking for the payment either he will be shown the door or given only a part payment even if all the stock was sold. It had reached a critical point when the salesmen could neither collect the money from retailers nor sell more detergent in the market. So, on one hand there still remained a huge accumulated credit in the market and, on the other hand a growing pile of stocks. At this point, Karsanbhai intervened. He called the entire sales team to understand the market situation. On this day, he decided to take the most drastic and daring step which was risky but revolutionary in the history of Marketing. He had realized the power of advertising on TV to reach the masses. He knew the company was ready.

The day after the sales meeting, the sales force was sent out to the market to collect either cash or every packet of Nirma that remained with the retailers. It surprised retailers and competition as well. Was Nirma closing shop?

That was the year 1982, when Karsanbhi Patel collaborated with Purnima Advertising Agency to advertise Nirma. For a full one month TV, Radio and newspapers were bombed with the campaign. The jingle ‘Sabki Pasand Nirma’ reached every middle-class home.

Consumers now started asking for Nirma but it was not to be found in the market. When the demand reached its peak, the retailers were left with little choice but to return to Nirma. This was Karsanbhai’s most innovative marketing strategy. The sales force gathered again, delivery vans got ready, material loaded and Nirma hit the market again. Now Karsanbhai’s product was dictating the credit terms. Consumers got the right detergent, at the right time, and at the right price. Nirma became the No.1 selling detergent overtaking Surf. Since then there was no looking back for Nirma. By 1985, Nirma washing powder had become one of the most popular, household detergents in India.

In 1993, the Company became a deemed public limited Company under Section 43-A of the Companies Act, 1956. By 1999, Nirma was a major consumer brand with a distribution network of about 400 distributors and over 20 lakh retail outlets across the country that helped the product penetrate the interiors of India. Since then Nirma has become an India conglomerate representing over 25 products ranging from Detergent Powders and personal care products like Toilet Soaps to chemicals like Sulphuric Acid, Glycerin, Alfa Olefin Sulphonates, Fatty Acids, Oxygen etc.
Nirma’s success is also attributed to its backward integration strategy for the regular supply of raw materials, which 90% they manufacture themselves. Also, modernization, upgradation, and expansion of the production facilities has helped Nirma survive tough competition. The company that got listed on the stock exchanges in the year 1994 has seen its ups and downs but continues to reinvent and remain in business.

Born in 1945, in Ruppur village in north Gujarat in a family of farmers, Karsanbhai Khodidas Patel has come a long way nurturing his dream. Beyond creating the INR 37,500 crore Nirma Group, he established the Nirma Institute of Technology (1995), the Nirma University of Science and Technology (2003), the Nirmalabs education project for entrepreneurs (2004). He also helped to setup Nirma Memorial Trust and Nirma Foundation, and Chanasma Ruppur Gram Vikas Trust which contribute towards deprived women and the uplifting of rural India. Karsanbhai’s two sons, daughter and son-in-law are now at leading positions in the Nirma organization to continue the legacy.

Sex educator, intimacy coach, and TEDx speaker, Pallavi Barnwal is a visionary who is in a constant...
Read more
Inspiring Stories

What Mukesh Ambani is to India, Carlos Slim Helú is to Mexico. In December 2020, while Mukesh Ambani’s net worth was US$76.5...
Read more
Inspiring Stories