Every Cloud has a silver lining: Proves Malvika Iyer who survived a grenade blast and wrote a Ph.D. thesis with her only finger

"Doctors were under a lot of pressure to save my life so they made some surgical errors while stitching back my right hand," wrote Malvika Iyer. 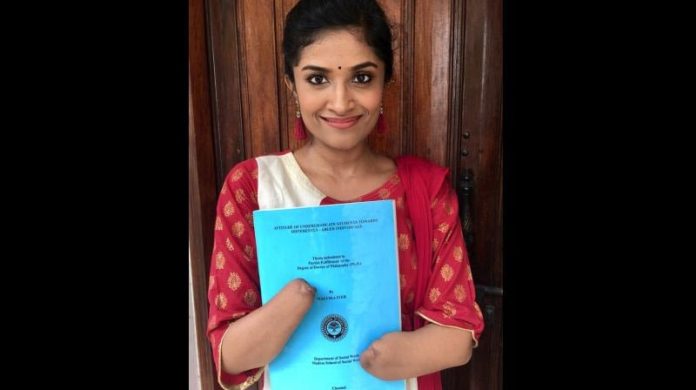 Although the world is full of suffering, some tales inspire us to battle the odds and fight the suffering. Many people suffer as a result of other people’s actions in this chaotic environment. Such is the narrative of Malvika Iyer, a 30-year-old lady who suffered the tragic loss of both her hands in a grenade blast. She’s come a long way from surviving the horrific explosion to receiving India’s highest civilian honour from the President and being the epitome of grit, valour, and undeterred human spirit that is capable of battling any human adversity.

When the terrible bomb ripped her arms off, she was only 13 years old. She was rummaging through her garage when her life changed forever. There had been a fire at an ammunition depot nearby that left fragments everywhere, and a grenade landed up in her garage — it exploded when she held it. She was severely injured in the explosion, losing both hands and suffering many fractures, nerve paralysis, and hypoesthesia in her legs. Despite the tragedy, she found the strength to pursue a Ph.D. and become a worldwide motivational speaker. She kept telling herself that she had it in her despite her disability to reach the goal she set her eyes on.

Coming out of the shell

She grew more robust and more confident as she stepped out of her shell and interacted with others. But there were still traces of skepticism and self-pity. “Watching my friends live regular lives and enjoy things I couldn’t do made me sad,” she adds. “What I can not be and what I can’t do overwhelmed me.” When she began her master’s degree in social work at the Delhi School of Social Work, her perspective on the world shifted dramatically. Malvika had to tutor differently-abled children as part of her fieldwork.

She witnessed firsthand the bravery and strength of the students she had asked to educate. “Instead, I ended up learning so much from them,” she recalls, teary-eyed. Others continuously bring up Malvika’s impairment. On the other hand, she claims to live by Scott Hamilton’s words, “The only disability in life is a lousy attitude.” “I’ve realized that even if I were the President of India, people would still feel sorry for me. It’s in their blood. Now I focus on my strengths rather than other people’s reactions to me. That was all it took to turn my life around.”

The Bikaner-born bilateral amputee celebrated her 30th birthday on February 18, 2020, by tweeting her story of survival. Everyone is applauding Iyer’s bravery and courage after the tweet went viral. In a recent viral Twitter thread, she discussed how surgical blunders occurred while doctors attempted to save her life and how they turned out to be a blessing in disguise. Because of the medical error, she had left with a projecting bone that didn’t cover by tissue. “A bone protrudes from the stump and is not covered by flesh. I’ll die of pain if I smack my hand against something. “Malvika conveyed her sentiments.

Surprisingly, she was able to see the bright side of the situation. Because of the surgical error, her bone now behaves like her lone finger, the one she used to type her whole Ph.D. thesis! The protruding bone was essential in helping her write her Ph.D. thesis and the website she wanted to share with the world, both of which were made possible by her “exceptional” finger. She went on to say that every experience, big or small, is priceless to her. She also adds that she finds delight in the tiniest things in life. Malvika has established herself as a role model as a result of her life and accomplishments.

The never-ending letters she receives from individuals from all walks of life are the fuel that keeps her going in life. She wrapped up her thread by thanking everyone for being her “cheerleaders” and “showing her love” every single day.

Dr. Malvika Iyer is currently a national award winner, an international motivational speaker, a disability activist, and a worldwide shaper at the World Economic Forum. She is also a model for inclusive fashion and a TEDx speaker. The multi-talented woman has received numerous honours and distinctions, including the ‘Nari Shakti Puraskar,’ India’s highest civilian honour for women.

Iyer reflected on the sad incident on Twitter, writing, “On the eve of my bombing anniversary, I’m wearing Amma’s dupatta, which she wore on the day I lost my hands, May 26, 2002. This dupatta is my most valuable possession, as it is stained with her blood, tears, and bravery. It reminds me of how I’ve never allowed my past to dictate my future. Never surrender.”

There is indeed a way where there is a will. Courage is what distinguishes a person in the face of adversity. Despite suffering such hardship at the young age of 13, Dr. Malvika Iyer emerged victoriously, and her tale serves as an example to many who have faced similar challenges. Hers is a narrative of bravery, perseverance, and tenacity that will inspire millions of people.

It is undoubtedly the right time to make the world aware of the various prosperous ways people achieve their dreams while resolving...
Read more
Women Power

The Blind Lady who earns Rs. 50,000 per month by selling Ghee and Superfood Supplements

Geetha Saleesh, from Thrissur, Kerala, was detected with retinitis pigmentosa, a rare inherited illness when she was just 13 years old. By...
Read more
Women Power

Vibha Tomar: A Veterinary Student Who Turned Life-Saver For Strays During COVID-19 Pandemic

Since the COVID-19 pandemic hit the world, many services have been discontinued, businesses have closed, and most people in shanty communities and...
Read more