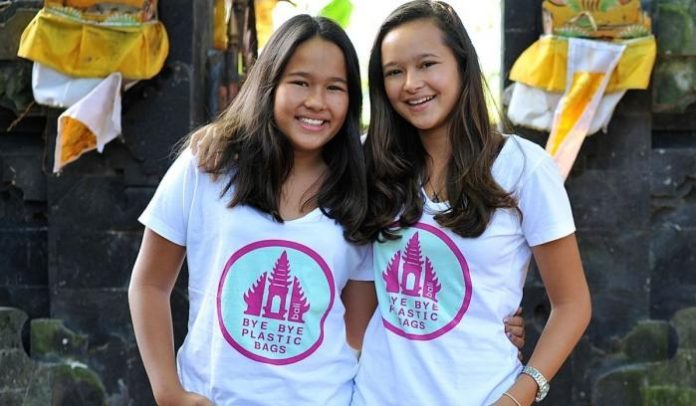 Climate change is arguably the most potent and urgent threat to the world we live in. While the larger problem of global warming will haunt future generations, we are already witnessing the effects of excessive fossil fuel use, widespread deforestation and pollution. Over the past few years however, the global consciousness has risen to acknowledge this problem and figure out ways to combat it. It is all the more heartening to see young people all over the world take charge of this issue and make genuine efforts to carve out a brighter tomorrow, as has been exemplified by Swedish activist Greta Thunberg.

But long before she stole headlines the world over by defying world leaders and criticizing their approach to fighting climate change, sisters Melati and Isabel Wijsen were crusading to ban the use of plastic bags in their home island of Bali, a successful campaign that has made them a role model for teenage climate activist the world over.

Having been brought up in Bali, the sisters were well aware of the plastic problem that plagued Indonesia. The country is among the leading plastic polluters in the world, largely due to widespread use of single-use plastics, improper disposal practices and lack of recycling. Such was the gravity of the problem that the beaches of Bali are swamped with plastic trash from the ocean every year during the monsoons. Fittingly, locals referred to the wet months as ‘trash season’.

In 2013, when Melati was twelve years old and Isabel just ten, the two decided to take matters into their own hands. Inspired by stories of inspirational leaders like Nelson Mandela and Martin Luther King, the two established a youth-run NGO called Bye Bye Plastic Bags in Bali. As their campaign to say no to plastic bags gained momentum, their TED talk in London, and address at the United Nations in New York helped attract international attention to their cause. However, even after securing over 100,000 signatures on a petition to ban plastic bags in Bali, local government officials paid them little heed.

Once again, Melati and Isabel looked to the heroes of the past for inspiration. Taking a leaf out of Mahatma Gandhi’s book, the two decided to go on a dawn to dusk hunger strike in 2016 to catch the authorities’ attention. And it worked like a charm!

Soon, the two of them were invited to meet with the governor, who soon signed off on an order to ban plastic bags, styrofoam and plastic straws in the province starting 2018. Sure enough, the Bali government introduced the regulation in December 2018, ending a monumental battle for the Earth started by two young girls. Today, Bye Bye Plastic Bags has grown to be an international organization, organizing beach cleanups all over the world, raising awareness about plastic pollution and educating the young about more sustainable lifestyle choices through training programs.

https://open.spotify.com/episode/160gu7rMYELiixln8eXpfG?si=808b5e1f08fb4bba A passion for handbags and a dynamic-entrepreneurial drive led to the inception of Namrata...
Read more
Inspiration

However, the efforts are continuing unabated. Naresh Pal, a native of Uttar Pradesh, conducts a school beneath a bridge in Delhi that...
Read more
Inspiring Stories