Besides being a doctor, Dr Deva is also an influential personality promoting plastic clean-up drives on mountains. He has even opened Rs.1 OPD clinic during COVID19 Lockdown, becoming a hard-working frontline worker. 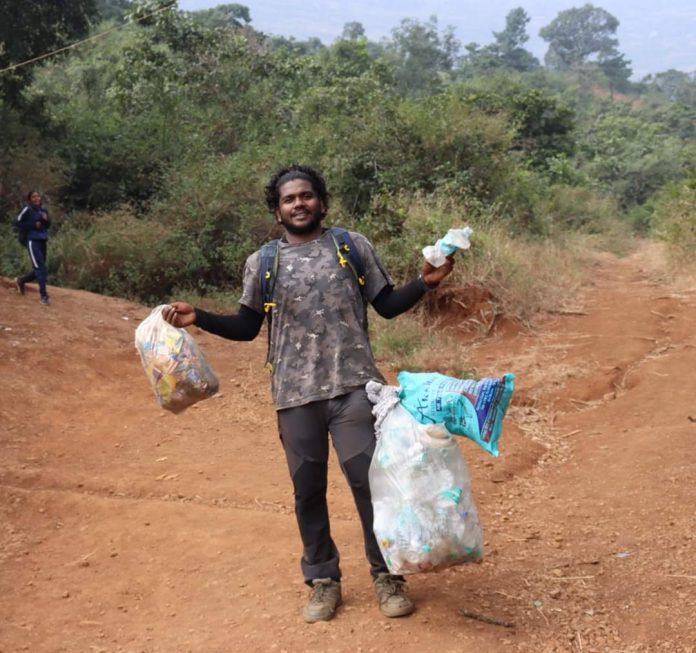 How did this initiative commence?

Dr. Parmeshwar (also known as Dr. Deva) added hiking and mountaineering into his hobby when he was in 2nd year of MBBS in Seth GS Medical College. Their college conducted hiking for freshers, and from there, he got introduced to mountaineering. Then, he covered up different mountains for hiking, including the Himalayas. When he saw the garbage on mountains, specifically the plastic bottles and cans, he thought of starting a plastic clean-up drive, as plastic pollution is dangerous for wildlife and nature.

He is actively working with participants who work with him in this social cause. 48 professional trekkers conduct this mountain social initiative together with him frequently. They collect garbage on mountains manually, wearing gloves. They are helping nature by working towards a social cause.

Safety protocols are kept during hiking!

He and his medical team keep all the medical facilities and first-aid for the people living near mountains and even the team members. They have been part of medical rescues, one of which is a rescue through a video call.

During the hiking and collecting garbage on mountains, one trekker’s shoulder got dislocated during climbing. One of Dr. Deva’s junior interns, Sherin, suggested connecting with an Orthopedic doctor over a video call for a solution. Also, luckily there was a network, and Dr Deva, with all his hard work and dedication towards his work, fixed the trekker’s shoulder successfully. He saved a life through a video call.

He and his team wear ropes (if required) and even keep walkie-talkies to communicate together in emergencies. If some injury happens, they can easily connect without worries. Thus, he even keeps a check on the safety of his team and people on mountains.

DR. Deva started this Rs.1 OPD Clinic in Mumbai near his home during the peak time of the pandemic. Medical hospitals and clinics were charging very high fees for consultation that people could not afford. Thus, to help the middle-class people, he started the Rs.1 OPD Clinic, where people come for a consultation about COVID and other general problems. He helped them for almost free and saved their lives too!. During the PODCAST, he said that he is currently working in Kasturba Hospital, and It was the first hospital to cater to COVID19 patients in Mumbai, where he performed his part too!.

Struggles that he faced during mountaineering initiative.

He faced and is still facing lots of struggles during this social cleaning drive, starting when he completed his MBBS. He was already interested in this mountainous adventure field. In the beginning, he did not even have money to drink a cup of tea. But, later, he made strategies about convincing people to join this drive. So, he stepped ahead in making his social drive successful.

He with his team thought of sponsoring a college for the same. Hence, it was his first campaign. He influenced 70 students from RD National College in Bandra for garbage cleaning and collected around 26 gunny bags of plastic from the highest peak of Maharashtra.

Also, the struggle was where to dump the garbage collected?. Thus, he and his team concluded recycling the plastic and joined hands with a few companies. His struggles never stopped him from doing good for others and the environment.

A goal to clean all the mountains!

Dr. Deva is even getting help from the nearby villagers who clean the mountains with him and his team. They even prepare food, provide washrooms and space to reside. It even helps the locals of the mountainous region to get employment in return. Thus, he is even doing good for the nation.

He plans to launch his organization for the good of mother nature and people. He worked with a few companies and now plans to make his own. He wants his thoughts to reach millions!. The name he has thought of giving to his organization will be Wild And Out or WildNOut. Wild means doing good for wildlife and mother nature, whereas Out would be thinking out of the box and coming out of the comfort zone to clean up mountains.

He is also conducting campaigns and seminars with his team about COVID19 in Mumbai and the Mountains. Doctor Deva is also providing education to the masses. His message to the audience is to do responsible travelling and sustainable tourism. He wants to promote cleaning initiatives on and for mountains. Thus, we will surely see mountains clean whenever we go hiking!.

Cleans Mountain is no more a dream Mountain!