The spicy trail and travails of MDH Masalas 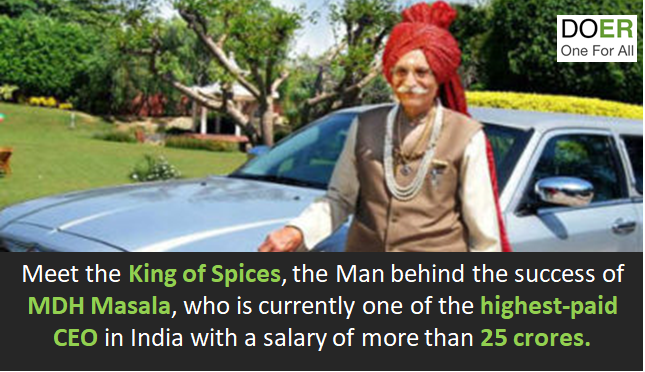 Mahashian Di Hatti Private Limited, better known as MDH Masalas, is India’s second largest spice producer with a 12% market share started by Mahashay Dharmapal Gulati. The 97-year-old Mahashay Dharmapal Gulati was born in 1923 in Sialkot, Punjab Province of British India (present day Pakistan). There his father Chunni Lal Gulati ran a masala shop since 1919 called Mahashian Di Hatti. The spices became famous and they were called Deggi Mirch wale. Dharampal grew up with 2 brothers and 5 sisters, father Chunni Lal and mother Chanan Devi. A young Mahashay Dharampal who dropped out of school after Std V, joined his father to help in the business. This is where he learned about different spices and creating masalas. But things took an ugly turn during partition and his father’s business was destroyed. The family left everything behind to come to India. This is the story of MDH from a refugee camp in Amritsar to Delhi and how it grew into India’s Rs 2000 crore spice company.

In the year 1941, Dharampal Gulati got married to Leelawanti. Though he was only 18 then, family responsibility got him to strive harder. At that time, he used to visit Amritsar to buy chillies, turmeric and other spices and grind them in a mill set up below his Sialkot home. In 1947, they left Sialkot and arrived in a refugee camp in Amritsar, India.  Dharampal, had arrived with a meagre rupees 1500. In order to earn for the family, he bought a tanga (horse and carriage) for rupees 650 starting as a tangawala in the free India ferrying passengers on Qutub Road. On October 10, 1948, he sold the tanga to start a small shop in Ajmal Khan Road, Karol Bagh called ‘Deggi Mirch Wale’. This was the rebirth of the spicy success story of MDH masalas and its Indian ‘King of Masala’.

Dharampal and Leelawanti had two sons and six daughters.  In 1992, they lost their son Sanjeev. In the same year, Dharampal became a widower.

In 1953, after the success of his first shop at Karol Bagh, he rented another in Chandni Chowk. In 1954, he founded Roopak Stores in Karol Bagh, which was India’s first modern Masala Store, the concept that started to gain immense popularity. India was getting ready to buy ‘readymade masalas’ which until then was unheard of and more of a secretly guarded recipe in every home. Seeing this shift, Dharampal handed over the store to his younger brother Satpal, to enter large scale manufacturing of masalas. In 1959, he set up the first manufacturing plant at Kirti Nagar in Delhi, continuing to call it ‘Mahashian Di Hatti Limited’ (MDH), which loosely translated to ‘the shop of a magnanimous man’ in Punjabi.

There was no looking back for MDH Masalas. Gulati slowly expanded the business to 15 factories.

Here are some interesting facts about MDH:

Up Close and Personal

The ever-green Gulati
The 97 years young Mahashay Dharampal Gulati is fondly called MDH Uncle, Dadaji, or The Masala King. He is still quite active and in touch with people in his factories and markets. We wish this motivational entrepreneur and living legend a continued spiced life to cross a 100 soon…