Home Stories Influencers Will a Cuban be the President of America?
FeaturedStoriesInfluencersInspirationDOER TVInspiring Stories

Will a Cuban be the President of America? 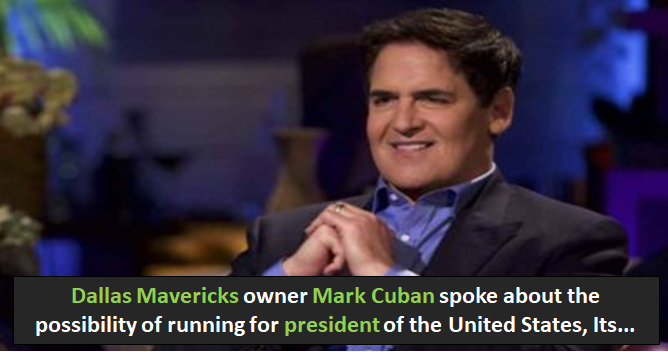 Yes, this is the story of Mark Cuban, an American entrepreneur, actor, producer, and investor who has a desire to someday run as a candidate for the President of America!

Mark Cuban a third-generation American was born on July 31, 1958, in Pittsburgh, Pennsylvania. He lived with his parents Norton and Shirley Cuban and brothers Brian and Jeff. Cuban was resourceful and a go-getter. At age 12, he first tasted business by selling garbage bags to earn for a pair of shoes that he wanted to own. In high school, he began to sell stamps and coins. At 16, Cuban seized an opportunity during the Pittsburgh Post-Gazette strike by organizing newspapers from Cleveland to be delivered to Pittsburgh homes.

As time passed, the young lad’s initiatives continued turning pages. In the freshman years at the University of Pittsburgh, he gave psychology classes and again during his term at Indiana University taught dancing. His other college ventures included a bar and chain letter

A science student, who understood the economics of demand-supply better than most, Mark Cuban graduated in 1981 from the Kelly School of Business, Indiana.

A smart opportunist, MicroSolutions to Broadcast.com

After graduating with a Bachelor of Science degree in Management he returned to Pittsburgh, to work with Mellon Bank. It was the time when bank ledgers were being replaced with desktops. Cuban was a fast learner. He grasped computers and networking and a year later on July 7, 1982, left the bank and moved to Dallas in pursuit of bigger and better opportunities.

The time was right. Cuban was becoming an expert in computers. In Dallas, he landed up working as a salesperson selling software for Your Business Software, until he was fired less than a year later, after meeting with a client to procure new business instead of opening the store. Not an easy start as he slept on the floor when he first moved to Dallas but that was Mark Cuban’s first turning point. It led to him to set up his first company MicroSolutions. In 1990, Cuban sold the firm to CompuServe for USD 6 million.

Seeing the growing opportunities in America, in 1995, he partnered with Chris Jaeb and his Indiana University alum Todd Wagner, to launch AudioNet. What began as a mutual interest for webcasting and to be able to listen to Indiana Hoosier basketball games online, turned into another profitable business. In 1998, AudioNet went public and renamed themselves as Broadcast.com. A year later during the dot com boom, Broadcast.com was sold out to Yahoo for USD 5.7 billion.

Broadening the Net of Investments

Mark Cuban the entrepreneur was just beginning to walk the street of success. In the years that followed the sale of Broadcast.com he cast his net even wider to invest in startups and prized ventures. Cuban,

Mark Cuban the Learner and the Teacher

Mark Cuban is an ardent fan of author Ayn Rand. While quoting Ayan Rand’s novel The Fountainhead, he said, “[It] was incredibly motivating to me. It encouraged me to think as an individual, take risks to reach my goals, and responsibility for my successes and failures. I loved it”.

Mark Cuban leaves you with six pieces of valuable advice – be nice, take risks, outwork everyone, be brutally honest with yourself, be prepared to win, and try out different things.

Some like Mark, not only learn fast but readily share their lives lessons with the world. Online and off, controversies have followed Mark, but he has taken responsibility and continues to rise albeit it all. Only time will tell if he becomes the President of America and as much loved as President Barack Obama.

I still work hard to know my business. I’m continuously looking for ways to improve all my companies, and I’m always selling. Always.