Tegla Loroupe, a Celebrated Woman Marathoner and Activist from Kenya 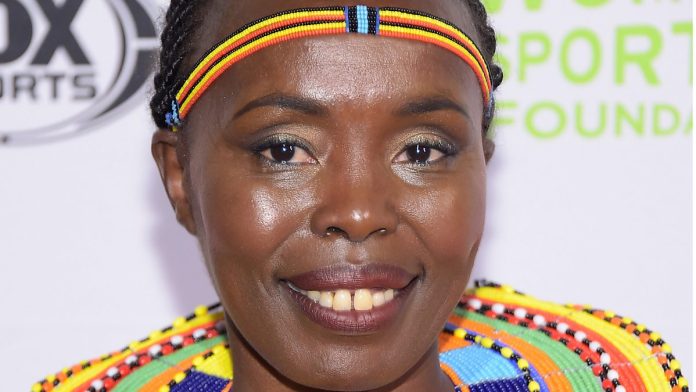 The celebrated woman marathon runner from Kenya, Tegla Loroupe is an Athlete, Activist, Peace Advocate, and Children’s Advocate. The long-distance track and road runner holds the world records for 25 and 30 kilometres. To add to her many credits, Tegla held the record for being the first woman from Africa to win the New York Marathon on April 19, 1998. She has also won marathons in London, Rotterdam, Hong Kong, Berlin, and Rome. Tegla represented Kenya at the Olympics in Barcelona 1992, Atlanta 1996, and Sydney 2000.

Growing Up as ‘Chepkite’, the little one

Tegla Loroupe was born on May 9, 1973 in the Kapsait village of the Pokot tribe, of northern Kenya. Having a small frame, she grew being called ‘Chepkite – little one’ by her 24 siblings. Her father Losiwa who had four wives and 25 children made the older kids work in the fields, tend to cattle, and look after their younger siblings. Children’s education was not on his agenda.

Loroupe was allowed to attend Kapsait Elementary school only after her mother and older sister Albina persuaded her father. Since transport was a luxury in her village, she ran every day 9 kilometres to and from school. While this continued she slowly began to race other older children on their way back from school. That’s when Loroupe thought of becoming a runner. Of course, nobody in school or at home would support this decision except her mother.

In November 2009, President Kibaki presented Tegla an Honorary Doctorate of Science on Peace and Conflict Studies (Honoris Causa) from the Masinde Muliro University of Science & Technology.

Tegla thanks her mother for two sentences that helped her become what she is and stands for today “You can endure pain, so one day you will be the best.” and, “If you own property yourself, you are not the property of a man.” Both of which she followed to the tee!

Once turned away by the Kenya Athletics Federation, Tegla Loroupe, is now a Member National Olympic Committee of Kenya.

Tegla competed in the marathon at the Olympic Games in Barcelona in 1992, Atlanta in 1996, and Sydney in 2000. During the 2000 Summer Olympics in Sydney, she was the favorite contender expected to win the marathon and the 10,000 meters but due to food poisoning the night before the race she could only finish 13th in the Marathon. Next day, at the 10,000 metres, she finished in 5th position. Both races she ran barefoot.

Loroupe’s biggest successes include world records over 20, 25 and 30 kilometres in marathon distance. She held the One Hour running World record of 18,340 m set in Borgholzhausen, Germany, until Dire Tune of Ethiopia set a new record in 2008 (18,517 m).

The idea of the Tegla Loroupe’s Peace Race: a ten-kilometre sporting competition between warriors from rival tribes led to setting up the Tegla Loroupe Peace Foundation in 2003. The foundation’s mission is ‘to promote peaceful co-existence and socioeconomic development of poor and marginalized individuals and communities in Northern Kenya and the Greater Horn of Africa Region’.

In Kapenguria, 50 kilometers away from her birthplace Kapsait, Tegla has set up the ‘Peace and Leadership School’, to provide education to girls. The school also offers protection from abuse, forced marriage and genital mutilation, which is still prevalent in among in Africa. Today more than 400 orphans live and study here. The school also intends to find and nurture sports talent in local children.

Tegla rubs shoulders with the likes of Usain Bolt, Roger Federer, Barack Obama, Emanuel Macron, George Clooney, and many other stars. She speaks of her journey and the Peace Foundation at prominent gatherings like Hague talks.

The Race is far from the FINISH

Tegla continues to serve as,

https://open.spotify.com/episode/160gu7rMYELiixln8eXpfG?si=808b5e1f08fb4bba A passion for handbags and a dynamic-entrepreneurial drive led to the inception of Namrata...
Read more
Inspiring Stories

#ExclusiveInterview Creating Change One Day At a Time : Anju Verma

How would a caged parrot feel if asked to fly high and see the world? Anju felt that way when her mother...
Read more
Podcast

#ExclusivePodcast Ardent Theatre Women Aspiring The Desire To Leave A...