The Story of Muskan Ahirwar, a 14-year old librarian for Bhopal slum kids. 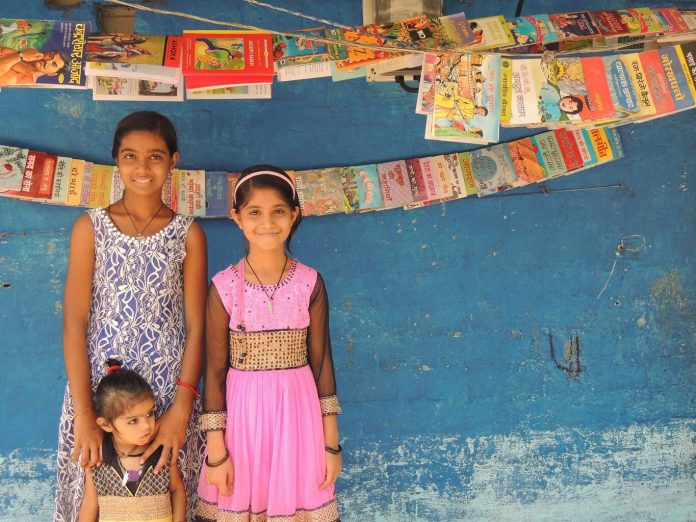 An educated girl stays healthy, saves money, builds a business, empowers her community, and lifts her country. Following this saying, Bhopal’s 14-year-old Muskan Ahirwar has been running a library for slum kids since the year 2016 to encourage reading habits for kids from a very early age. Her library, ‘Baal Pustakalaya’ is situated in her home in Durganagar, a slum area in Arera Hills of Bhopal,

Book reading plays a crucial part in our life as apart from enriching our vocabulary and increasing attention span, daily reading habit develops a love for books all through our life and encourages a thirst for knowledge. The more knowledge we get, the better equipped we are to tackle any challenge we may face. Inspired by these noble thoughts, 9-year old Muskan started the library in her mud-paved house with only 25 books of her collection.

Unlike every other child, Muskan does not go to play after her school hours but starts collecting her books, mats, along with her elder sister Neha and sets up the library for all the children in her slum. Initially, she had to face a lot of difficulties from the slum dwellers as people were ignorant and children were reluctant to read. Presently, her library is operated in the outside part of her house from 5 to 7 pm and nearly 25-30 children living in the slum eagerly wait to open the library.

“Kids can borrow any book they like after I enter their name in my register,” Mushkan said, adding that these kids also finish their homework at ‘Baal Pustakalya”. These kids are developing a flair for reading with the help of a bunch of civil services aspirants who visit the library regularly. Muskan’s Baal Pustakalya receives books from the United States, South Africa, and other countries, besides Indian cities like Delhi, Mumbai, Chennai, etc. Muskan, second among four children in her family, says she loves reading and wishes to become a doctor one day.

The journey of the library started in December 2015 when officers from the State Education Centre, Madhya Pradesh visited Muskaan’s slum to explore the Learning Curve of slum children. The officers conducted a quiz session amongst the children, in which, Muskaan, a natural talent emerged victoriously. Pleased with her performance, the officers handed over a total of 25 Books as a token of appreciation and asked her to share the same with all the children in her locality. The kids finished reading all the books within two months and they eagerly waited for a fresh set of books. To their delight, on the Republic Day of the year 2016, a new set of books arrived at their premises.

After its successful journey of five years, the library now houses around 1,000 books. Muskaan lost hope of continuing the library after the death of her father, Manohar Ahirwar on July 7, 2017, but to keep her spirit of supporting the children of slums, Madhya Pradesh Chief Minister Mr. Shivraj Singh Chouhan has extended Govt. support by offering Rs. 2 Lakhs as financial assistance to support her library. The government has also promised to construct a permanent structure for her Library near her premises. The Chief Minister has also urged the entire society to back up such initiatives of children so that the social fabric will entirely transform.

Muskan received the ‘Thought Leader’ award by NITI Aayog from Olympic medallist & wrestler Sakshi Malik in 2016. She was the youngest recipient of this award. She was one of the 12 winners selected as part of the ‘Women Transforming India’ campaign. This online campaign was launched on International Women’s Day by Niti Aayog in collaboration with MyGov and United Nations. In 2019, Muskan decided to donate all the money she had been saving for her birthday to the Sainik Kalyan Fund after the attack on CRPF personnel in Pulwama, J&K.

Muskan has also been awarded prestigious awards including ‘Princess Diana Award 2018’ in the U, ‘Sushiksha Award 2017’. Muskan’s out-of-the-box initiative of building a library for slum kids is felicitated at Hyderabad Literary Festival on January 25, 2019. The 14-year old is awarded for winning Indian Reading Olympiad 2019 under the category ‘I am Bond’. The event awarded winners in all the other 13 categories as future role models. She was also featured in the Devi Awards Indore countdown series on February 28, 2020.