Home Stories Influencers After reading this story you will think thrice before giving up on...
FeaturedStoriesInfluencersInspirationDOER TVInspiring Stories

After reading this story you will think thrice before giving up on anything. 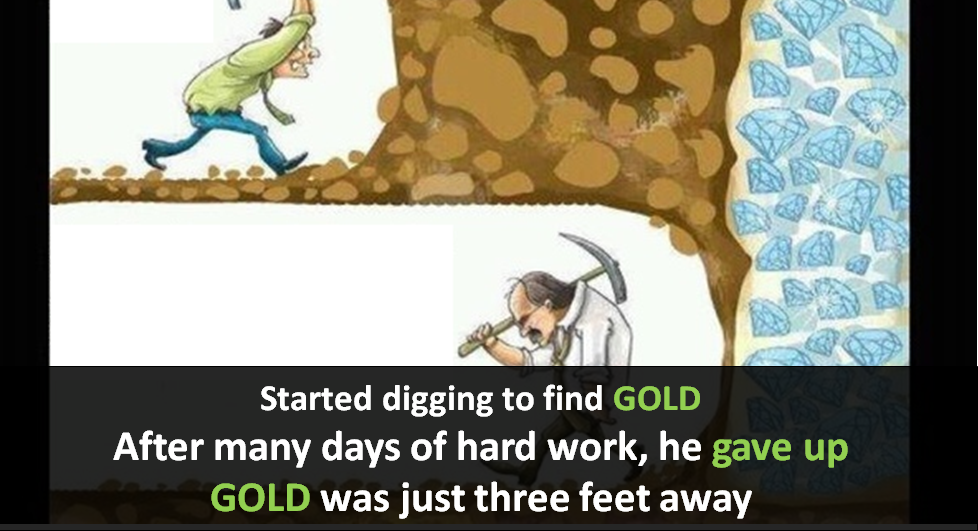 Napoleon Hill, author of the all-time classic book – Think and Grow Rich introduced the world with the story of ‘three-feet-gold’. This story has changed lives of millions of people since its publication. If you want to be successful then this story is for you.

This is the story of R. U. Harby and his uncle. During the California Gold Rush of 19th century, Harby’s uncle went to west to dig and become rich. He staked a claim and went to work with pick and shovel.

After weeks of labor, he discovered some hints of gold. Quietly, he covered his mine, went to back to his homeland to raise money for drilling equipment and other costs.

The uncle and Darby returned to the mine. Things began working for them but clearing the mounting debt was the priority. They were excited for the big killing in profits.

Then tragedy hit and the gold traces just vanished. They had to come to the end of the rainbow, and the pot of gold was no longer there. They drilled desperately and deep to find any trace of gold they could – all to no avail.

Finally they decided to quit.

They sold all the machinery to a junk man for few hundred dollars and took the train back home.

The junk man called in a mining engineer to do a little calculating. The engineer advised that the project failed because the owners were not familiar with ‘fault lines’. His calculation said the gold is just three feet from where the Darbys had stopped drilling! That is exactly where it was found.

The junk man went on to become one of the richest man in the california.

Long afterward, Mr. Darby recouped his loss many times over. He learnt from his mistake of giving up just three feet away from gold. Darby used this life experience into the business of selling insurance.

He went on to become one of the richest life insurance sellers of his times. He owed his “stickability” to the lesson he learned from his “quitability” in the gold mine business.

Successful people are aware that failure is a trickster with a keen sense of irony and cunning. It enjoys tripping one when success is almost within the reach. See that as a sign and next time before quitting think hard because you may be just three feet away from your gold.