Meet Dr. Lalita, founder of Abha Kunj, who provides zero-cost education to anyone who can't afford it. 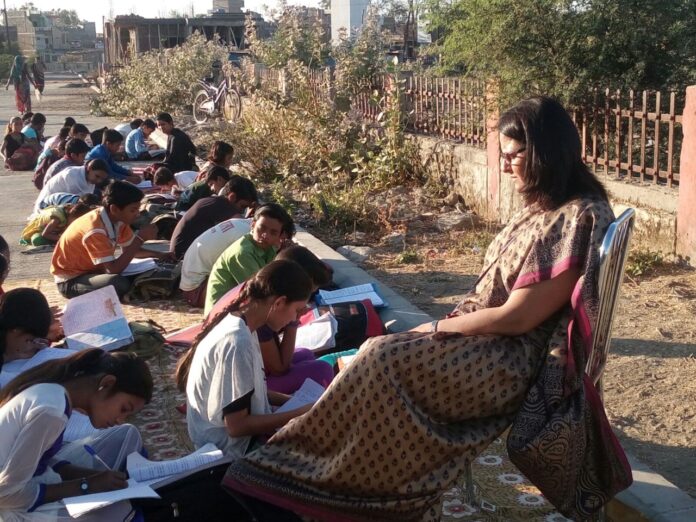 Dr. Lalita has been an ‘educationist’ since her youth days and a professor who used to teach law, public administration, and political science in different universities. “In all my years of teaching, I wasn’t satisfied with the kind of education that the youth was receiving.” says Lalita.

Once, in the garden opposite her house, she saw children and teens in torn clothes and school uniforms smoking, gambling, and stealing. When Lalita tried to talk to them, they ran away, thinking she was going to yell at them. Lalita questioned the lack of education. She then spoke to her husband, who suggested she talk to the parents in her area and start an initiative, now known as ‘Abha Kunj’ to educate people. The response was very disappointing initially. The parents thought if Lalita had come to give them food. After knowing that she was there to talk to them about educating their kids, some of them shut their doors in her face, and some told her that they didn’t have the money to get their children educated- they would rather have them work and earn bread and butter for their family because naturally, food was a fundamental necessity for their survival.

So Lalita, spoke to them about the importance of getting educated which resulted in 8 students coming to her house to get educated.What started with 8 students increased to 90 students within a month who were tutored by Lalita and students from the college she used to work at! Due to lack of space, Lalita’s ‘classes’ were moved to the street. In the long-term, this wasn’t sustainable. Lalita asked local authorities to clean her garden so she could host more students. After multiple requests, no local body helped her so she cleaned the garden herself.

Lalita taught 300 and later 518 students in her garden, house, and roads, including school dropouts, children who lost their parents in Covid or otherwise, students with financial issues, and women. This ‘school’ only required a thirst for knowledge, a desire to learn values, and a desire to improve society.

All these children were given practical education with the help of activities; they were taught different types of skills like resume building via various workshops and were given training on vocational courses like art and fashion too. 60+ women were trained across a span of 4 months to help them earn a living independently.

“Initially, getting women to get educated was tricky due to lack of awareness. But, I didn’t give up. I went to various satsangs and visited various women personally at home to encourage them to get educated and tutor them in groups. Later with mouth-to-mouth publicity, we started getting more women enrollments. “

Dr. Lalita’s open learning education system sustains on creative avenues of imparting education. Dr.Lalita has also hired special teachers for vocational courses to impart more quality and specialized education to her students. Some of these teachers are the ones she herself used to teach earlier!

Some of her students now can be seen in IITs, some are getting gold medals in the field of Msc Pharmaceutical Chemistry, and some are working in top-notch multinational companies like Cipla.

All these children were given practical education with the help of activities; they were taught different types of skills like resume building via various workshops and were given training on vocational courses like art and fashion too. 60+ women were trained across a span of 4 months to help them earn a living independently. When all my savings got exhausted, I searched for sponsorships too. Various companies like Reliance sponsored the education of my students.

‘Abha Kunj’, which was a personal project then, wanted to scale upwards to enrich the lives of more people. In 2017, Lalita registered Abha Kunj as an NGO giving open style learning.

Almost half of Lalita’s house, the lanes in her locality, and the garden opposite her house that has now become her office are being used to educate people. One of the rooms in her house has also been turned into a computer lab!

One of the most challenging things that Abha Kunj faces is the lack of space.  There are students who come from far away to get educated, but we aren’t able to accommodate everyone because of space constraints. “Colleges, as a part of their Social Responsibility Programme, want to send interns to work with us, but there’s no space.”

Abha Kunj envisions expanding itself all across India. Everywhere Lalita goes, she sees so many children who are far away from all the resources. “I can see their hunger for knowledge, but I can’t help them as much as I want to. I’ve done enough for me. It’s time to do something for society. Despite the challenges I’ve faced, if needed, I would do everything all over again if need be. I have no regrets. It feels spectacular to see that the one seed I sowed a few years back is now giving so many flowers. I truly can’t explain my happiness when I see my students succeed in life.”

However, Abha Kunj (as they should) takes pride in enhancing the lifestyle and socio-economic conditions of 100s of people, free of cost!

"All governments want to appoint one person from a weaker community to a top post so that voices of others of the...
Read more