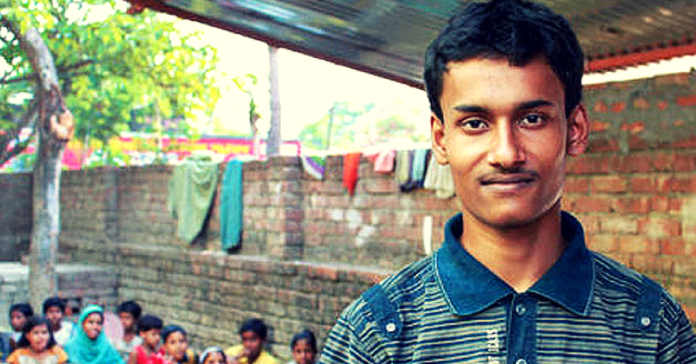 This is the inspiring story of a young guy- Babar Ali, for whom his age was not important but doing something for the poor children in terms of their education was important.

He was born in Murshidabad in West Bengal. He is a teacher and at the age of sixteen, he was named as the “youngest headmaster in the world” by BBC on October 2009.

He began teaching when he was just 9 years old, just as a hobby, but gradually it became a passion for him to teach as many children as possible. His dream was to teach them at a larger scale, to spread knowledge and education.

He started a school of his own with a current count of 10 teachers and 800 children. The school fees are very economical for the poor children and which has certainly helped these kids to learn, educated and grow.

The school has been recognized to increase literacy rates in India. As there are no schools and colleges in Murshidabad, children’s from neighbour villages walk 4 km every day to attend his lectures. The Bengali-medium school, recognized (but unaided) by West Bengal Board of Secondary Education in 2012, offered education from Class 1 to Class VIII.

He was awarded the NDTV ‘Indian of the year’ award and Literacy Hero award by Rotary India Literacy Mission and recently featured in ‘Forbes Asia’ in their 30 under 30 lit as a ‘social Entrepreneur’. He has also received the Education leadership award by BBC Knowledge. His contribution has become a part of the syllabus in the English textbook for 10th standard.

He was also quoted saying

“I will take the UPSC exams to fulfill my father’s dream, but my own dream is to teach children till my last breath,” Babar says. “I want to see each and every child educated.”