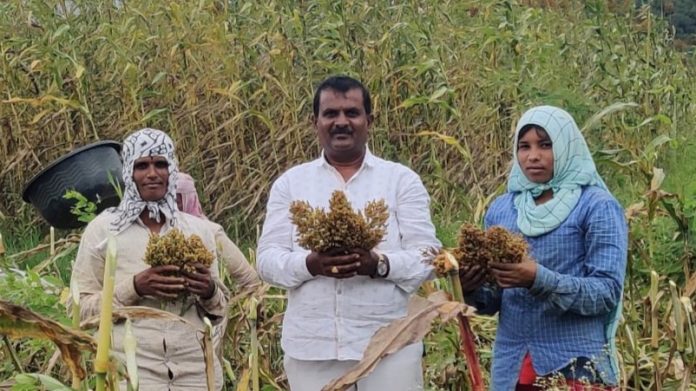 “I want to reach consumers all over the world who are looking for a healthy lifestyle and thereby, benefit my farmer friends”, says Veer Shetty Biradar, a farmer from Sangareddy district in Telangana State, India. He owns 13 acres of dryland and 5 acres of irrigated land growing sugarcane, chickpea, red gram, jowar, bajra, foxtail millet, and finger millet. But most importantly, he is the man who is inspiring farmers to grow millets – he is the Millet Man of India!

Veer Shetty Biradar, the eldest of three brothers, belonged to a farmer’s family. After passing Std 9, he began to do odd jobs to support the family. Eventually, he joined as an assistant to Dr. C.H. Ravindra Reddy, principal scientist in the International Crops Research Institute for the Semi-Arid Tropics (ICRISAT). In 2014, ICRISAT tied up with Ramoji Film City to set up an agriculture theme park. Here, Veer began to get a deeper insight into farming. While working, Veer also attended classes via distance learning at Telangana’s Dr. B.R. Ambedkar Open University to complete his graduation. He continued to work with Dr. Reddy till 2016 while steadily growing millet on his farmland.

But one incident in 2006 changed Veer Shetty Biradar’s life. He was traveling for work in the remote areas of Beed, Maharashtra, and could not find any decent meal around him. It prompted him to think of producing food for future generations. So, he started growing sorghum. He mainly focused on sorghum and millets because of two reasons. Firstly, they require less water and continue to grow in adverse weather conditions, which benefits farmers. Secondly, millets are healthy food.

In 2007, Veer Biradar opened a small shop in Hyderabad selling jowari roti, but the venture failed because there was no awareness of the product.

By 2016, SS Bhavani Foods had sixty value-added millet products made from sorghum, bajra, foxtail millet, and finger millet. Besides, it also ran an industrial-scale kitchen and a small restaurant to serve millet foods and educate people on the nutritional benefits of millets through posters adorning the walls. Shetty soon started to sell 3,000 rotis per day through this outlet. He even began to export 2000+ dry rotis, which have a shelf life of 6 months, to Australia and 400+ pooranpolis to Dubai every month.

Along with the wide range of millet products, he has recently launched Millovit Health Mix, an immunity booster to ward off Covid-19 infection.

SS Bhavani Foods Private Limited that started with an investment of Rs 25,000, now boasts of an annual turnover of Rs. 1 crore.

In 2016, Veer Shetty Biradar established the Swayam Shakthi Agri Foundation (an NGO) in Huda Colony, Chandanagar, Hyderabad. According to Shetty, “To buy a kilogram of seed, a farmer has to travel to the town. Even then, he has no idea of the quality of the seed he purchases. We supply quality seeds to farmers at their doorstep. We even advise them on what crop to plant every season, taking into account the market prices, the glut, and shortfalls in the market.”

The foundation trains and teaches farmers to cultivate high-yielding millet crops by taking new technologies to the farming community. The farmers learn about preventing crop diseases, rainwater conservation, vermicomposting, aerobic composting, improving soil organic matter, and the latest sowing techniques. The NGO even buys back the millets at a premium price for food, feed, and brewing purposes.

The Foundation has collaborated with MS Swaminathan Research Foundation (MSSRF) to train 500 tribals in Koraput district to make various millet products such as laddu, sevaiyan, chiwda, roti, etc. The tribals fondly call him the Millet Man of India.

The Indian Council of Agricultural Research (ICAR) invited him to conduct his awareness programs in 8 villages of the Sangareddy district under their project, ‘Farmer First’.

Apart from all these awards and the recognition, Veer Shetty Biradar has earned the name – Millet Man of India.

Share
Facebook
Linkedin
Previous articlePramod Bhagat, The Journey of a Paralympic Gold Medalist Who Once Could Not Afford a Racket
Next articleShagun Singh, from leaving her job to building mud homes to bring environmental change!