Puran Bhaat, India’s best puppeteer will continue his fight to save Kathputli Colony 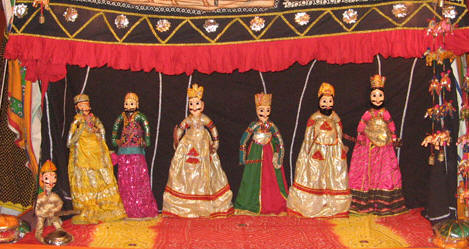 Puran Bhaat is a traditional puppeteer and contemporary theatre artist in Delhi, India. He is also the recipient of Sangeet Natak Akademi Award for Puppetry, Rajasthan that was presented to him by the President of India, Dr. A.P.J Abdul Kalam in New Delhi on 26 October 2004. Originally from Rajasthan, his father moved to Delhi almost fifty years ago. Since then the puppeteer family has been living in the Kathputli Colony, an artist community of Delhi. Surprisingly Puran Bhat is not just a puppet master but became known as an activist of Kathputli Colony who bravely stood up against the government of Delhi and Raheja Developer, the real estate shark from consuming the Kathputli Colony in the name of redevelopment.

How Kathputli Colony, Delhi got its name?

The ‘Kathputli Colony’ derived its name from the initial puppeteers who migrated from Rajasthan to Delhi in 1950s for a better livelihood. Upon arrival in the city, the puppeteer gypsies set up a small cluster of makeshift tents on a barren piece of field. Soon other performers joined in from Andhra Pradesh and Maharashtra and the colony mushroomed in the Shadpur Depot area of Delhi with an identity of a multi-artisan colony.

Kathputli Colony was a home to around 3500 families. The street performers living there were mostly puppeteers, snake charmers, acrobats, magicians, fire-breathers, dancers, musicians, and other performers.

From Puppeteer to Activist

Over five decades since 1950s, Delhi witnessed major growth. Land was becoming sparse and turned into a premier commodity while real estate prices sky rocketed. Kathputli Colony close to the new Metro station drew attention as an undesirable slum with tenements that needed to be redeveloped. In 2007, Delhi Development Authority (DDA) sold the land to Raheja Developers initiating a redevelopment plan on a public-private partnership (PPP) basis for the colony. In 2009, Raheja Developers announced the construction of Raheja Phoenix a 54 story skyscraper. Raheja Developers entered into agreement for its most prestigious project to convert 14 acres of prime land parcel into a plush area at an estimated cost of INR 254+ crores.

By 2013, the colony residents got wind of their impending eviction and began to resist.

Puran Bhaat became the most vocal spokesperson of Kathputli Colony.

Bhaat and few artists did not approve and even resisted this redevelopment project. For 7 years they circulated petitions and sought legal advice to stop them being forcibly relocated to the transit camp. According to Bhaat, firstly 495 families got left out of the rehabilitation plan. According, to their petitions it was not 2800 families as appearing in DDA list but close to 3500 families that had been residing at Kathputli Colony. As per the agreement Raheja was to give only the 2800 families a flat each measuring 350 sq. ft in the new built that would occupy 5 hectares land. Raheja would also provide them with an exhibition center or heritage museum, Kaushal Kala Vikas Kendra a multipurpose hall. The remaining land would go towards the construction of high rise commercial and residential towers.

Bhaat later sadly expressed, “Definitely after one year of living in these flats, the art will be finished. Everything will be clean, egos will develop, styles will change, flat prices will go up, they will sell the flats and there will be no need to work as artists”.

The battle comes to an end

In October 2017, after several notices deadlines and warnings the DDA finally arrived at Kathputli Colony and raised 400 shanties. The remaining families that did not move out in 2014, started to move to transit camp at Anand Prabhat and Narela. On April 24, 2018 the foundation stone for the redevelopment of the area was laid during an event attended by Housing and Urban Affairs Minister Hardeep Singh Puri, and Delhi Lieutenant Governor Anil Baijal.

With everything that was happening the Kathputli Colonly agitation began to attract considerable media attention. American filmmakers, Jimmy Goldblum and Adam Weber, made an award-winning documentary Tomorrow We Disappear (2013) starring Bhaat and some of the other Kathputli artists. The only real benefit the film screening brought to the Kathputli residents was some amount of respect as their homes were no longer called slums by the media but began to be known as an artists’ colony. Otherwise no real value to their struggles to keep redevelopment at bay.

In those years from 2009 to 2018, Kathputli Colony also had a tryst with the law. A bench presided by acting Chief Justice Gita Mittal and Justice Hari Shankar held Raheja Developers and DDA as responsible parties in breaking the law with forceful eviction and bulldozing tenements putting lives at risk. The court also ordered DDA to provide daily transport to those who were ready to shift into transit camps so they could easily commute to schools and to their place of work from the Narela camp to Shadiput Depot. But like many other promised benefits this too fizzled out in time as the project got delayed and homes to the artisans yet to be delivered.

Having said it all, the coronavirus lockdown that almost brought India to a standstill, has further delayed the transfer of home allotment documents to the Kathputli Colony families living in transit camps. Artists and crafts persons have been cramped in one-room lodging are suffering pitiable living conditions and are left with little income to feed their families.

While the woes of artisans continue and 3500+ families still anxiously wait to move into their new homes, Puran Bhaat, India’s best puppeteer and activist who fought valiantly seemingly became nothing short of a puppet himself in the hands of DDA and Raheja Developers.

Having said that I would still say we need MORE PURAN BHAATS to lead. Winning and losing are only part of the REAL estate game….