Sister PremaChowallur, a blessing to transgender people in India 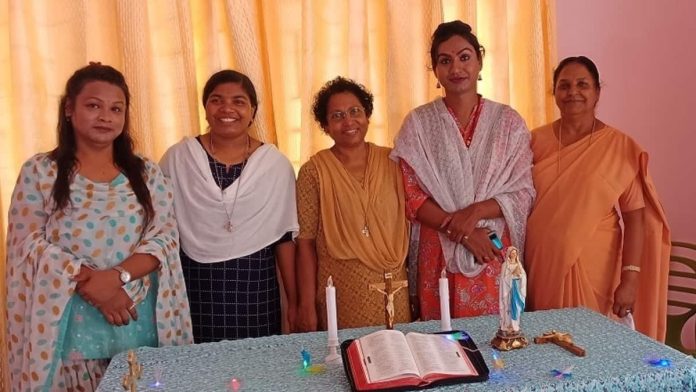 Sister PremaChowallur, a member of the Sisters of the Cross of Chavanod and a relentless supporter of the LGBTQIA+ community since 2016, is a beacon of hope for the transgender people, one of the most marginalized groups for years.

Starting from 2020, when she was assigned with a social work center to support poor communities, sister Prema had taken various initiatives to support the queer community despite the common notion of homosexuality being considered against the order of nature by the Church. She started traveling to work with various church-run and development groups across India and set up a temporary shelter – Rainbow Home of the Seven Sisters (RHoSS) at Christian Basti, Guwahati on 4 May 2021 to provide refuge to homeless transgender women and help them build a better future through the field of earning they are interested in.

They can earn their living being a beautician, designer, by making ornaments or other creative things. If they have a degree, they are guided to find suitable jobs, as the Shelter Home cannot be a place for them to stay all their lives. This place is only to heal and prepare them to stand on their own feet when they go back out to face the world.

As the shelter home is an apartment, it presently provides a safe space to 3 people and is not able to provide shelter to over five people at the moment. The nun is planning to expand the facility to provide a temporary home to more transgender people and is looking for a piece of land in the outskirts of Guwahati city.

“Finding land is not an easy job especially when you tell people that you want it to run a Shelter Home for the Transgender Community. Finding this rented apartment was also difficult but thanks to my network, I could find this place. People within the city are still not very open to accepting the transgender community. I want a place for them where they can sing and dance; where they can be free and be themselves,” she explained.

Sister Prema had joined the Sisters of the Cross of Chavanod (SCC) at the age of 18. Despite being a Keralite Catholic and willing to follow the footsteps of her parents to be a teacher, she chose to work for the downtrodden and was devoted to the ministry of education for over a decade and a half.

She was also part of several developmental societies and charities like PalliUnnayanSamiti (Rural Development Society or PUS), Tarumitra (Friends of Trees) and has also collaborated with the North East Diocesan Social Service Society (NEDSSS) in Guwahati alongside PurvanchalPragatiSamaj (Eastern Development Society or PPS), covering northeast India.

She achieved global recognition for her exceptional contribution to society and received an invite to attend a United Nations consultation on sustainable development. She served as the vice-president of the Indian chapter of Talitha Kum, a Vatican-sponsored international network of religious congregations against human trafficking. Afterward, she became the convener of the North East Forum for Justice and Peace and coordinator of the Crossian Consortium to Reach Out to the Periphery (CCROP) of her congregation.

Sister Prema mentioned a bus incident where a transgender woman was sitting alone as nobody dared to sit beside her. The story of her deprived life inspired the nun to start working for transgender people and listen to their woes, struggles, and the discrimination faced by them in society.

She remembered an incident where a family had accepted their transgender child and was willing to raise him, but people from the neighborhood did not accept that and began picking up fights with them. She assessed that this is a wrong attitude that our society has towards gender minorities and dedicated her life to serving the transgender community of Assam since then. Moved by the incident on the bus, she joined the Global Network Rainbow Catholics (GNRC) and Indian Network Rainbow Catholics (INRC) to comprehend the challenges faced by people from LGBTQ communities and fight for them.

As per the 2011 census, Assam has a transgender population of about 11,375 people including 1,348 children. Their literacy rate is around 54% only and they have to drop out from studies and earn a living through begging as none offers them a job. Even after being a complete human with all working abilities, their every right is denied.

Sister Prema mentioned in one of her interviews that “They are ridiculed and humiliated, relegated on the margins of cities, forced into prostitution. These are the people whom society never counts as human beings. They experience everyday rejection, aversion, sarcastic smiles, and abusive words as they pass by cities and towns. So they walk through bylanes and stay in slums to hide from society. It is the need of the hour for us to reach out to them. Our goal is to remove them from the backyards of skyscrapers and slums, and restore their dignity.”

During the pandemic, sister Prema helped the transgender community with food, medicines, and other essentials. She also requested help from the North East Diocesan Social Forum of Guwahati, her sisters, and their Wing Women Development Centre and received kits that contained food, hand sanitizer, masks, detergent powder, bathing soap, and phenyl. These kits are distributed to the transgender community living in Maligaon, Pandu, and Gandhi Basti, three slums of Guwahati.

Other groups, such as the Church of North India, Assam Baptist Convention, and the Guwahati Catholic archdiocese too pitched to reach out to the transgender community living in the railway slums of Guwahati.