He left his job as a chief assistant director to Rajkumar Santoshi to help over 3000 people change their life by assisting them to 'Dance Their Way Out Of Poverty! 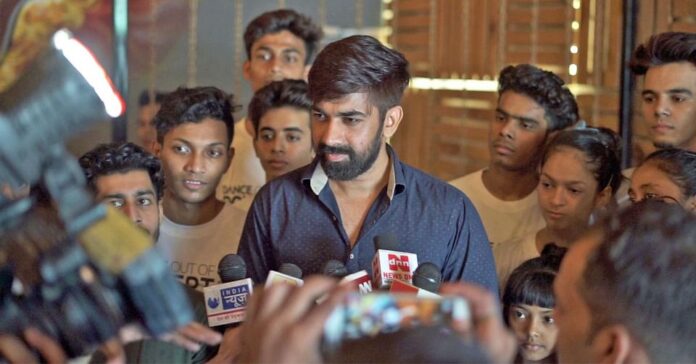 During this break, he took a two-month dance workshop, and the late Saroj Khan Ji agreed to be his mentor. The workshop had around two hundred financially unstable/ challenged children eager to learn the art form but couldn’t afford it. He was ecstatic to see the positive response and enthusiasm from this workshop, the confidence it instilled in the students, and how much it empowered them. This was when the idea of starting an initiative to help transform the lives of the underprivileged through dance came to his mind.

Vinay says, “Though dance is not considered a part of the education system in India, it has immense potential to bring out the best in people and give wings to their dreams. Once it is learned, it can be pursued as a hobby or even a profession. Several children and adolescents out there have the yearning to shake a leg but do not have the means to go ahead. I laid the foundation for the Dance Out of Poverty initiative to teach this art form for free.”

There were many NGOs to help the underprivileged with food, health, and education. However, according to Vinay, there were barely any NGOs to help them learn and perform arts like dancing. This motivated him to start ‘Sinhayana Foundation’ and launch an initiative called DOOP- Dancing Out Of Poverty, through which he could teach dance to the youth for free.

Vinay received a lot of criticism from people because he was leaving a high-paying job to do social service. However, Vinay remained resilient. With tremendous hope of helping people through dance and empowering them, he used all his savings to support this initiative moving forward.

The motto of the DOOP program is to nurture and channel children’s energy through dance while facilitating them to grab employment opportunities in the field. The choreographers travel to slums across Delhi and Mumbai to bring together children of the area who are interested in learning dance and teach them for free.

“Various elements like fundamentals of dance, facial expressions, body movements, theoretical concepts, fitness, and nutrition are focused upon. Besides, every year, we organize a show where all of them get a chance to perform on stage for a huge audience, including Bollywood celebrities,”

However, the journey of starting DOOP was not an easy one. Initially, a lot of corporates lauded his initiative. But, when it came to investing in DOOP, all of them shied away. They wanted him to bring substantial numbers to show them. None of them were ready to support him in the risk he was taking for himself to give back to society. “If no one was willing to back my idea, I had to do it myself. I believed in it, and what better way to prove that than to have skin in the game?” To this day, Vinay has invested over twelve lacks in this initiative. There was a time when everything that he owned was poured into making this initiative a success.

DOOP has now placed over 100 students as choreographers, dancers, and dance instructors in the film industry! DOOP has had a profound impact on the lives of its students.

I can say with confidence that dance healed me. Until I joined the program, I was a drug addict with no reason to look after myself or live a good life. I had nothing to look forward to. Dance gave me a reason — it allowed me to excel, to get clean, and give up my dependence on drugs.”

One of its students, Kaushal, says, “DOOP helped convert my hobby into a passion. From stealing money to fund my drug habit to contributing to my family’s financial well-being through dance – I have come a long way.”

Mamoni Barban, one of the other students of DOOP, also spoke about how to help her family financially; she had to juggle between school and her job of dressing as various characters at events. Within a month, Mamoni got accepted into DOOP and had the opportunity to work with Ranbir Kapoor and Katrina Kaif!

Can dance help people turn their lives around? We now know it can!