Sushmita Sen expressed appreciation and delight for "having the honor of portraying this lovely lady and of exposing her narrative to the world" in a post about the first look of her new series Taali, which is based on the life of transgender activist Gauri Sawant. 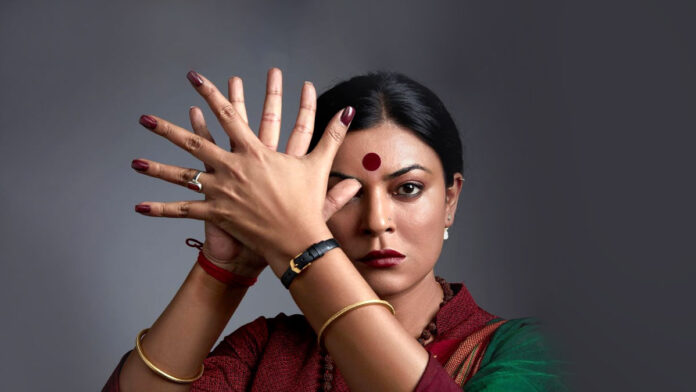 The biography will follow Sawant’s journey, who adopted a baby in 2008 and pushed for trans people’s adoption rights. Ravi Jadhav, a Marathi filmmaker, is in charge of the direction. “Here’s to life and to everyone’s right to live it with dignity,” Sen added in her message.

Gauri’s “story of hardship, resiliency, and unshakable might” will be told by Taali. At 17, the activist left home with Rs 60 in her pocket. She fled her home and arrived in Mumbai because her father refused to accept who she was.

“I just wanted to seem feminine. Men’s attire never made me feel free; I always felt confined. Since I was a young child, whenever I would see singer Usha Uthup on television, with her wrists jingling from a variety of bangles, her pallu in her hand, and her distinctive large bindi adorning her forehead, I had dreamed that I would look like that when I grew up,” Gauri said to Femina, adding that her dream came true when she met trans people at Juhu Beach who forced her to wear a saree.

Gauri began making money with the aid of the NGO Humsafar Trust. She subsequently founded her non-profit organisation, Sakhi Char Chowgi, which strives to improve the health and career prospects of transgender people and offers counselling.

“Always wanted to have children.”

The campaigner, who was given the name Ganesh at birth, eventually adopted his mother’s name instead, saying that she “always wanted to be a mother.”

“I was given the name Ganesh in honour of the elephant-headed deity. And when it was time for me to choose a name, I opted for Gauri, another name for Parvati, the mother of Ganesh. I’ve always yearned to have children. I recall answering that I wanted to be an aai when I was asked what I wanted to be when I grew up by a nosy relative at a family gathering when I was a child,” Gauri added.

Gauri’s ambition would come true in 2001 as she worked with sex workers to raise awareness of STDs. She met Gayatri here.

Upon hearing rumours that Gayatri was being bought and sold for sex labour following the death of her biological mother, the campaigner allegedly intervened.

“My kid taught me that motherhood is all about nurturing and loving a child; you don’t need to have a uterus or give birth to a child. Gauri remarked in a video, “I was glad when people began to recognise me for my motherhood.

Gauri Sawant, a transgender activist and the inaugural trustee of the Sai Savli Foundation Trust, said on Tuesday that for transgender people to be able to exhibit themselves fully, society must first embrace them as human beings, regardless of any distinctions. She advocated for the society to be identified as the third gender in addition to the rights of trans people to adopt.

Because of how our gender identification differs from the patriarchal society’s viewpoint and convenience, we have always been denied the opportunities and privileges we deserve. Sawant remarked during a panel discussion that Shankarrao Chavan Law College hosted in honour of National Coming Out Day.

The Election Commission of India appointed her its first transgender election ambassador in 2019.

The 10th of October will mark the start of Taali’s filming, according to a story in Mid-day. According to the source, 300 transgender performers have been hired for the series.

"All governments want to appoint one person from a weaker community to a top post so that voices of others of the...
Read more
News